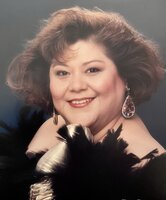 Later, Maisie attended Providence High School her freshman year, and then graduated from Brackenridge High School in 1968. She then attended San Antonio college. Soon after high school she joined then Southwestern “Ma” Bell as a 411 Information Operator, moving up the ranks to become one of the first women lineman and later became supervisor. Maisie spent more than 20 years with Southwestern Bell until her early retirement, working in both the San Antonio and Dallas offices.

Maisie had two children, Miguel Saturnino Salaz (deceased at birth) and Ernest Anthony Salaz, born on her father’s birthday, October 28, 1971, and a day before her mother’s birthday. Ernest graduated from Mount Sacred Heart and Central Catholic High School in San Antonio, and Brown University in Providence RI. He was her pride and joy.

In 2010, Maisie moved to Austin, Texas to be closer to her family. She spent the last 12 years always making many friends, spending time with her son and daughter-in-law, and enjoying her grandchildren grow up.

Maisie is survived by her son Ernest and his wife, Heather Salaz, her two grandchildren Roman (15) and Stella (12), from Austin, Texas, and her brother Felix Sanchez, from Washington, D.C. Preceding her in death are her parents, Felix and Stella Sanchez and infant son, Miguel Saturnino Salaz.

A Memorial Service will be held at 11:00 a.m. on Friday, September 16, 2022 at Mission Funeral Home at 6204 S. First St., Austin, Texas.  A Reception will follow the Memorial Service. Services will be live-streamed to allow those unable to attend to participate.  Follow link to Facebook Live Mission - South Side

In lieu of flowers, a donation may be made in Maisie’s name to The SAFE Alliance Austin: https://www.safeaustin.org/get-involved/donate/donate/.