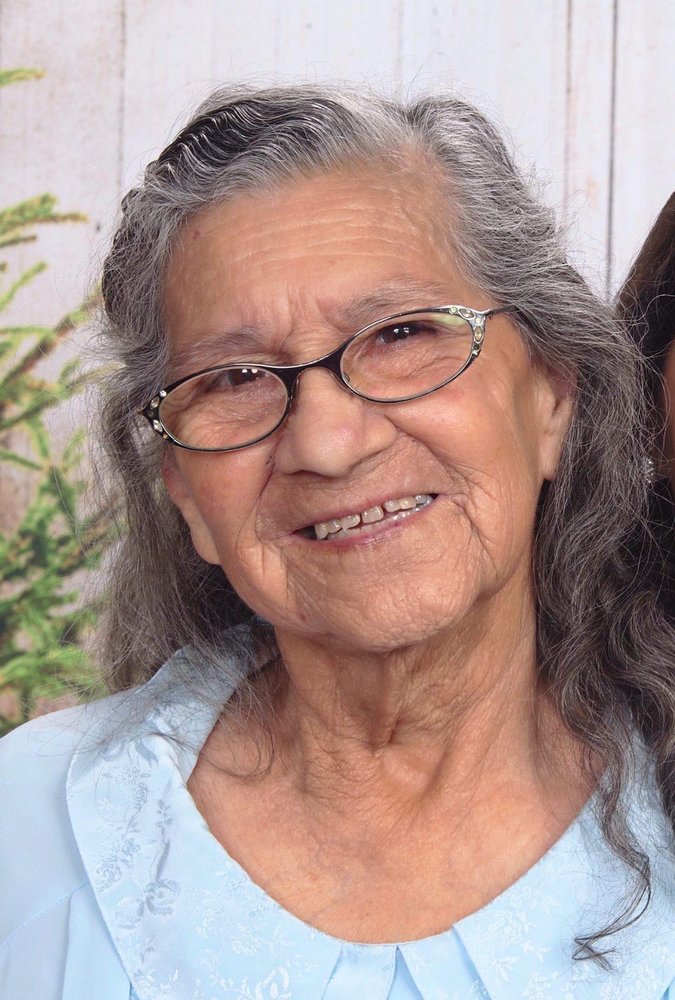 Agapita Navarro Limon was called to heaven on February 1st, 2019.  She was born on March 24, 1934, in Austin TX, to Louis Perez Navarro and Carmen (Garza) Navarro.  She was the sixth in a family of seven girls.  She attended school in Austin where she met her future husband Benancio Limon.  They were married in 1952 and had eight children, four boys and four girls.  Agapita had many roles in her life and met each one with the single purpose of making the world better.

As a mother, she instilled the meaning of family in her children.  “Family sticks together.  They look out for each other.  Show each other respect and courtesy.”  Like all mothers, she had “the LOOK” and infamous sayings.  Her response to bikinis was “You will be dead before you wear that thing again.”  When one of her sons came home drunk for the first time stating that he was sick and dying.  She told him to die outside.

She was not a strict disciplinarian.  She simply guided her children and gave them the freedom to explore. “Always do your best work, be open-minded, trustworthy, and responsible.  Endeavor to not hurt others and also stand up for those who can't stand up for themselves.”  She led by example and fought many a battle not only for her children but for many other children.  “Be courageous, patient, compassionate, and never give up.”

There was a quiet determination instilled in her.  When she broke her back in an automobile accident (1986) the doctors were not sure that she would survive or be able to walk.  Agapita not only walked but she learned how to dance again.  When she broke both her arms several years later (1992), she was determined to make her hands re-learn how to write and draw.

Agapita did not travel or have vacations; she had a family to support and raise.  She was both mother and father to her children during her husband’s recovery from three separate heart attacks & surgeries.  She worked hard, planted a garden for food, and made clothes for her children.  Always resourceful, she re-purposed many items, showing her children the results of having imagination and ingenuity.

Imagination was quite evident in the family events where everyone was included (family, neighbors, friends, and others).  Easter egg hunts were not just for the children but the adults also.  Everyone contributed to the meals at Thanksgiving.  At Christmas, carols and performances were always required.  No one opened any presents until they were all distributed.  Family members even took turns playing Santa.

Agapita knew the importance of education and devoted much of her life to teaching elementary school in the Austin ISD.  Her great love for children drove her to give her time and her talents unselfishly.  She volunteered at many of the school functions and was an active member/officer of the PTA.  She taught kickball at the Boy’s Club and sponsored the Short Horns cheerleaders for their mini league football team.  You could always find her at the track and field days at Becker Elementary School or at the Austin Parks & Recreation city wide swim meets.

She made sure all her children graduated from high school and several went on to get their college degrees.  Years later, she went back to school to pursue her childhood passion and acquired a degree in Art.  Even after her children were out of school and on their own, Agapita continued to teach.  She took American Sign Language to help her communicate with the deaf population.  She taught ESL to the oriental population at the community schools learning a little Korean, Vietnamese, and Chinese as she taught.

Agapita also knew the importance of knowing the history and culture of one’s race.  In 1972, she founded a Mexican folk-dance group called “Bailes Folklorico Del Sur” a non-profit organization (1975 – 1989).  The dance group was a way to teach the community about the Hispanic culture and instill pride in the children.  She began the group with her own children and their neighborhood friends.  She made their costumes (including Jalisco, Veracruz, Polkas, etc.), taught/choreographed the dances, and transported the group to different sites in the city to perform.  All of this was done without pay and with a great deal of patience and enthusiasm.

With her leadership the group grew to thirty dancers ranging in age from four to twenty.  They held performances throughout Austin and the surrounding communities.  Pictures of her dance group were published in many of the local newspapers, Texas magazine, and one can still be found in the World Book Encyclopedia under Texas.  Her endeavors contributed to making folklorico dancing and the Hispanic culture an integral part of America’s history.

Agapita’s talents also extended to the community schools where she was asked to teach dance classes throughout central Texas from Austin to Llano.  She taught at recreation centers and helped other organizations prepare special performances during holidays.  She also made some of the costumes for the dance groups at Austin High School and Bastrop High School.  The lives of numerous children were enriched by her dedication.  Several of the dancers became instructors for other dance groups.  Even those who didn’t continue dancing still remember the steps to many of the dances they performed.  Her efforts also helped set the foundation for having dance class as a gym alternative in our public school systems.

Giving back to the community also kept her busy teaching catechism classes at her church and running precinct 424 election poll center during voting sessions.  Agapita was also an accomplished artist.  She did not like to discuss her work or participate in exhibits.  However, she did manage to sell some of her paintings and participated in painting a mural on one of the stairwell walls of the ACC Rio Grande campus.

In 1998, Agapita started her own small arts and craft business of home-made items which she sold at craft shows throughout central Texas.  Some of her items were also sold at the Old Bakery Emporium in downtown Austin.  She changed with the times.  Continually learning and growing, she encouraged everyone to pursue interests and take pride in self-expression.  She had an endless to do list that often tried the patience of her family.

Agapita was 80 and still teaching in the AISD, when a stroke interrupted her energetic life.  Her last few years were a struggle and she didn’t understand the abrupt change from normal life to middle stage dementia and Alzheimer’s.  She was continually trying to teach even though her memory failed her. Despite all the obstacles put in her way, Agapita lived her life with a passion for helping others.

She raised not only her children but also many others.  Her family did not always like sharing her but knew it was something she had to do.  Agapita’s children and grandchildren grew to be teachers, medical technicians, dancers, government employees, and military personnel.  They also became mentors, foster parents, and adoptive parents.  It is very difficult to measure the value of one life or the benefits derived by those around us.  Agapita enriched the world by her time here with us.  She will truly be missed.

We are proud of you mom and will always try to follow in your footsteps.

Visitation will be held from 5:00 p.m. - 9:00 p.m. with Recitation of the Holy Rosary beginning at 7:00 p.m. on Wednesday, February 6, 2019 at Mission Funeral Home - South Side. Mass of Christian Burial will be held at 10:00 a.m. on Thursday, February 7, 2019 at St. Ignatius Martyr Catholic Church. Interment will follow at Assumption Cemetery.

Please visit www.missionmemorials.com to order flowers and leave condolences for the family.

Share Your Memory of
Agapita
Upload Your Memory View All Memories
Be the first to upload a memory!