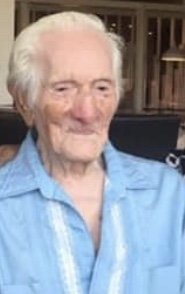 Our beloved Alberto P. Ruiz, age 91, of Austin, Texas, resident of East Austin, was called to our Heavenly Father on Thursday, September 5, 2019.  He was preceded in death by his son, Samuel Ruiz; his parents, Margarita and Manuel Santa Ana and Alberto Para, and his siblings, Manuel Ruiz,  Aurora Ruiz Montez, Ezequiel G. Ruiz, John G. Ruiz, and Christina Corral.

He is survived by his Beloved wife of 61 years, Sara Vasquez Ruiz; his children, Viola Ruiz, Marie Sanchez and her husband, Ralph, Patricia Ruiz, and Viviana Smith, and her husband, Randall; his grandchildren, Albert Ruiz and his wife, Anitra, Joshua Rendon and his wife, Elizabeth, Jeannie Ruiz, Gabriel Davila, Asdrubal Peguero and his wife, Anayma, Melissa Peguero, Angelica Bermudez, Marcus Bermudez, and Matthew Smith, and ten great grandchildren.  His sister, Margarita "Margaret" Santa Ana Lopez, and many other loving family and friends.

From the family of Alberto Ruiz:

My father Alberto Ruiz was an imperfect human being but his character spoke to the man he was as well. He was a man with a tender heart, loyal to a fault, had a strong sense of righteousness, didn't see people for the color of their skin - only their heart, and was wise for all the years he had lived.

I was blessed with many of his stories and there are too many for me tell you in this short paragraph but for those whom he spent time with, they can recount his stories too. Some from his youth and many from adulthood. One in particular stands out for me. Shortly after my brother passed away I participated in a retreat ministry and asked my father to attend the men's retreat. He hesitated but said he would go under the condition that he was able to come back home at night and sleep in his own bed. I agreed to pick him after evening prayer. I picked him and asked him how the retreat was going so far; he told me the group I am with consist of a lawyer, a millionaire, an engineer, and some other men who were very educated. He felt a little overwhelmed by their education and status, and didn't think he had anything in common with them. So I thought about that but didn't really know what to say to him. I prayed for the right words. The next morning I picked him up and took him back the retreat. I asked him again how he was feeling and He told me, "I can't tell you about the retreat cause that's personal but I really don't want to go back there". And the words just came, I reminded him that Jesus who was a carpenter yet shared his father God's word with anyone who would listen. Jesus came into this world as a humble carpenter to impart wisdom to the Pharisees, educated, the poor, and the sick, and taught them about the way to his father's kingdom. My father looked at me in a different way and agreed to go back to the retreat.

I prayed for him in the chapel that he would find peace with these new brothers in Christ I knew from the bottom of my heart that he also had gifts to share, gifts he wasn't even aware he had. I picked him up and asked him how he felt about his retreat experience now that he had had time to pray and interact with these new brothers. He had a new outlook on his experience, you see the Lord had put him in this group for a very specific reason. All these men also had burdens associated with their success. I can't tell you what those were because as my dad said, the retreat was very personal but he did tell me what he shared with them. He told them I've been married to my wife for over 50 years (someone asked him if it was to the same woman and he was so perplexed by that question) he answered them of course to the same woman! His advice, even if you disagree with her don't argue just do what she says in the end your going to do what she says anyway, so avoid the stress. As the provider of your household you have to work but try and find a balance your family needs you to be present, this he knew firsthand because he had sometimes lived an unbalanced life between work and family. Because my dad did not have wealth, status and degrees He felt he didn't have much in common with these men but at At the end of the rereat he had contributed the most valuable pearls these men could have received at the retreat. He had been blessed with a band of brothers in Christ who looked up to him as a wise man and respected him for it. And his new brothers had been blessed with my father's wisdom taking his advise to heart.

My dad had many stories some sad, some very funny and some, just spoke about his experiences. This story came to mind because when he took his last breath I saw him in my minds eye, walking up to Jesus with a smile on his face. Even in death, as he departed he gave me a sign that he was at peace, he knew He was loved by family and friends; and that knowing gave him joy! I shared this scripture with my dad, Jeremiah 29:11 For I know well the plans I have in mind for you, says the Lord, plans for your welfare, not for woe! Plans to give you a future full of hope.

Share Your Memory of
Alberto
Upload Your Memory View All Memories
Be the first to upload a memory!