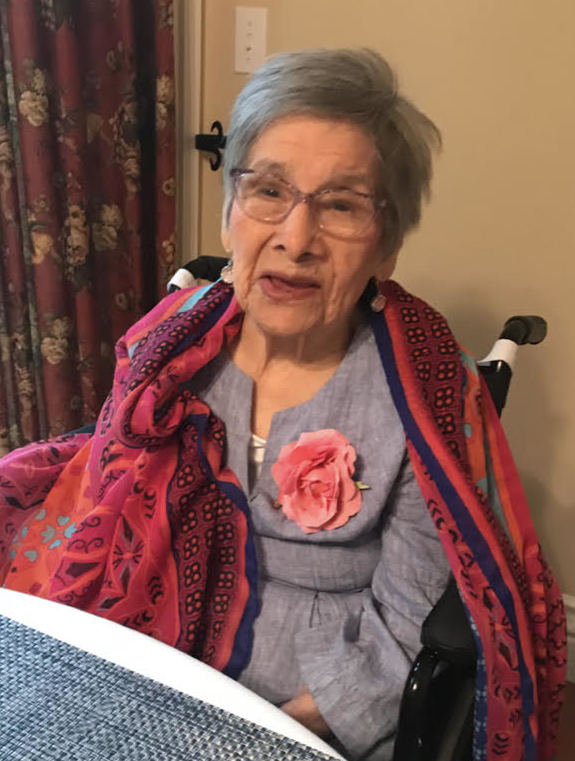 Josephine (“Fina”) Moreno Zamarripa quietly slipped away in the early morning hours of May 2, 2021. The matriarch of a large East Austin family, Josephine graced this world for 92 years. Her battle with dementia, and later Alzheimer’s, prevented her from living in the present, but she always knew her adult children were there to love, care for, and protect her.

Fina was born on August 26, 1928 in Creedmoor, 15 miles from her ultimate home in East Austin. She was a lifelong Roman Catholic and had a deep and abiding faith in God. Before retiring to bed each night, Fina and her children knelt on the linoleum floor to pray the rosary.

Fina attended Austin public schools at a most difficult time. Though she loved school and excelled in it, the strong arm of injustice drove her away in the eighth grade. When all her children had graduated from high school, Fina marched herself back to school and obtained a GED in her 50s. She told no one of her accomplishment.

Upon leaving school, the 13-year old Fina went to work at a laundry. It was a tough job for a child. She could handle it, but not the malfunctioning equipment. She tragically lost the fingers of her right hand and had to learn to do everything with her left. With the help of an attorney, the teen obtained a financial settlement, which she used to purchase a house.

After the accident, Fina met a man eight years her senior. Following a brief romance, she and Guillermo Zamarripa married. They wanted a small family, but ended up with 14 children. They were together 20 years until his unexpected death in 1964 left Fina alone to raise their 13 surviving children. The oldest was a freshman at The University of Texas at Austin, the youngest three months. A baby twin daughter had died six months prior to Guillermo’s passing. Fina was 36.

When all her children were in school, Fina sought employment outside the home. She worked as a teacher’s aide at Brooke Elementary School and subsequently at Seton Medical Center until her retirement at age 65. She then worked briefly as a caregiver with Family Elder Care.

The diminutive woman was a tower of strength. She could be spunky too. But most of all, she lived her life with quiet humility. She believed in good government and always voted, even when one had to pay a tax to do so. In 1975, she volunteered in the successful campaign to elect her younger brother John as the first Mexican American on the Austin City Council. Seeing the fruits of her labor pay off, from then on Fina remained politically involved, campaigning for candidates and environmental justice causes. It was not unusual to see her speaking before the city council, boards, and commissions. She never learned to drive, but like-minded friends always made sure she got to her meetings. For her tireless efforts, PODER awarded Fina the Cesar Chavez “Si Se Puede” award. In 2014, the Austin Tejano Democrats recognized her with a community service award. Brooke Elementary and Allan Junior High Schools each honored her for volunteer service.

Fina imparted her love of learning and the importance of education to her children. They all graduated from high school; eleven attended college; eight completed bachelor’s degrees; and two earned law degrees. One became a special assistant to a Texas governor, while another worked on the campaign staff of the first Mexican American elected to statewide office. The others served in various professional capacities.

When Fina’s children were grown, they took her on trips to Portugal; Washington, D.C.; Maryland, and New York City. She loved going to beaches, where she thanked God for creating such beauty. One day, she surprised her family by catching a Greyhound bus to California.
In Austin, she often accompanied her oldest son, an Austin Symphony board member, to concerts. She had no formal training, but the ever-enterprising woman taught herself to understand the beauty of classical music and opera. It was the same with productions at the Paramount Theatre and Bass Concert Hall. In her later years, when she was confined to a wheelchair, her excursions to Festival Beach and parks gave her much pleasure. In the evenings, Fina enjoyed watching her two favorite movies: “Gone With the Wind” and “Doctor Zhivago.” Other times she opted for boleros or classical music. When it became difficult for her to eat at Luby’s Cafeteria, she took great delight in having a savory cheeseburger at home. Her thin arm and reach became frightfully long when she finished with her burger while others were still munching away.

The family wishes to thank her caregivers Lupita Martinez and Minerva Vasquez and the nurses and care aides of Encompass Hospice, who tenderly cared for Josefina during her final months. On Monday, May 10, a public viewing will be held from 5 to 7 p.m. at Mission Funeral Home, 1615 East Cesar Chavez Street. A rosary will be said at 7 p.m. At noon on Tuesday, May 11, a funeral Mass will be celebrated at St. Austin Catholic Church, 2026 Guadalupe, followed by interment at Assumption Cemetery.

Due to pandemic protocols, the number of attendees will be restricted at all services held at Mission Funeral Home, St. Austin Catholic Church, and Assumption Cemetery. Attendees will also be required to wear a mask. We appreciate your understanding and support.

Rosary will be live-streamed to allow those unable to attend to participate.  Follow link to Facebook Live Mission - East Side

To plant a tree in memory of Josephine Zamarripa, please visit Tribute Store
Monday
10
May

Share Your Memory of
Josephine
Upload Your Memory View All Memories
Be the first to upload a memory!
Share A Memory
Plant a Tree