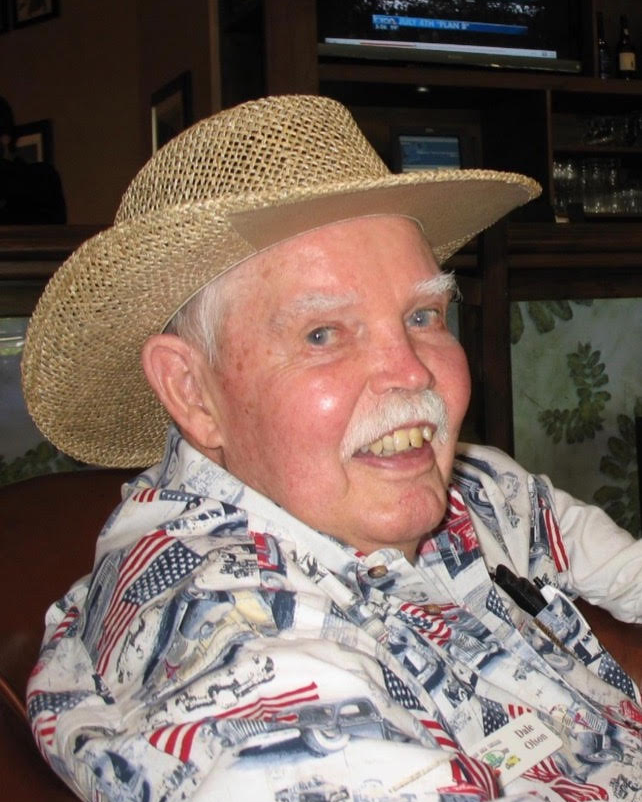 Please share a memory of Dale to include in a keepsake book for family and friends.
View Tribute Book

Dale's grandparents immigrated from Sweden in the 1880’s and settled in the New Sweden/Kimbro community. Dale was the fourth of six children born to Philip Olson and Irene Anderson Olson on May 22, 1937, at home on the family farm in Kimbro, Texas.

He grew up attending New Sweden Lutheran Church in Manor. He was baptized and confirmed and has remained a lifelong member of New Sweden Lutheran Church. The church was always a very special place to him. Dale attended Manda Consolidated School and graduated from Elgin High School in 1955. He attended the University of Texas for one year studying Engineering, thus his love for UT. He worked at Austin National Bank and then for the Bureau of Reclamation. While with the Bureau of Reclamation, he worked locally, in the Rio Grande Valley, Salt Lake City, Colorado, Wyoming and Arizona. He surveyed power lines in many large reservoirs for possible dam construction. While with the Bureau of Reclamation he joined the Army Reserves and served for 6 years. He then proceeded to get his Survey License and opened Dale L. Olson Land Survey Company in Bastrop in the late 1970’s. Dale was a renowned surveyor that took great pride in his work. He retired from surveying in 2017 after 40 years in business. Dale loved his work as a surveyor and his clients. He was the County Surveyor for many years. Dale also served on the Board of Directors of the BWCID#2 in Tahitian Village.

Dale was a single dad to his young children Michael, Kenneth and Kimberly. His family joined in to help raise them. After settling in Bastrop, he made his home in Tahitian Village. In 1996 he met his wife, Peggy; they have had many years of fun times together. Dale has battled numerous health issues since 2009, but he never let that get him down or stop him from doing what he loved. Dale was a true Gearhead and could be found in the garage under the hood of one of his cars almost every weekend. He loved telling tales of drag racing out on Highway 290 and all the antics of those young boys. Dale has always loved Corvettes, but if you ask him what his favorite car was, he would reply “my Imperial Ivory 1957 Chevy with Red & Black interior”. Dale owned numerous Corvettes over the years. He and Peggy traveled in their Corvettes to many local and out of town car shows from California to North Carolina. They even toured historic Route 66 in his little Red Corvette convertible. He actively participated in the Bastrop Veteran’s Weekend Car Show, as well as sponsoring other local car shows. Whether participating in a caravan to the Corvette Museum in Bowling Green, Kentucky with 1000’s of other Corvette enthusiasts or taking Museum Delivery of his new Corvette in the Corvette Museum, he always enjoyed it 100%.

He was a member of the Bastrop Area Cruisers, Lifetime Members of Lone Star Corvette Club-Dallas-Ft. Worth and Longhorn Corvette Club-Austin. Another one of Dale’s pastimes was playing guitars. He enjoyed going to local Opry’s and attending the Winfield Music Festival in Winfield, Kansas. He always said, “you can never have too many Cars or Guitars”. Dale was an avid UT fan and attended almost every home football game at DKR. It was hard to find a T-shirt in his closet that wasn’t Burnt Orange. With Season tickets he always had family or friends attending with him. You could regularly see him wearing headphones tuned into the game on the radio, whether at the game or watching at home. He said that “he bled ORANGE, so don’t bring anything home that is Maroon”.

Dale was known to host some memorable Christmas Parties and was always up for a good margarita. Dale loved to be the host when joined with family or friends at home, at a Mexican restaurant or the Annual Olson Pig-skin Kickoff at Murphy’s Steakhouse in Winchester. Dale was the epitome of Texas – A Family man, Big hearted, Generous, Happy, Honest, Hardworking, Humble, Kind, Loving and Strong. He loved his Family, Texas, Mexican, and a good margarita. Dale was a very quiet man, but you could never underestimate his wit.

The family would like to thank the Staff at New Haven Assisted Living in Bastrop for the care they have given Dale over the pasted 2 years. Many thanks to Resolution Hospice for supporting us when we needed it most. Thanks to the many Encompass/Inhabit Home Health Nurses and Therapists for always taking super care of Dale. A special thanks to Dale’s Super Doctors; , Dr. Robert Doughtery, Dr. Beth Hellerstedt, Dr. Robert Northway, Dr. Valerie Espinoza, Dr. Eric Frischhertz, Dr. Caitlin Geisler, Dr. Peter Nixon, Dr. Shawn Wong. We would also like to recognize the wonderful care Dale received from Brenda Hill, Linda Meadows and Jade Rickabaugh, years before while living at home.

Funeral Services will be held, Friday, August 26, 2022, at 10:00am at the Bastrop Providence Funeral Home. Interment will follow at the New Sweden Cemetery.

In lieu of flowers, donations may be made to The Michael J. Fox Foundation in memory of Dale Olson

Share Your Memory of
Dale
Upload Your Memory View All Memories
Be the first to upload a memory!
Share A Memory