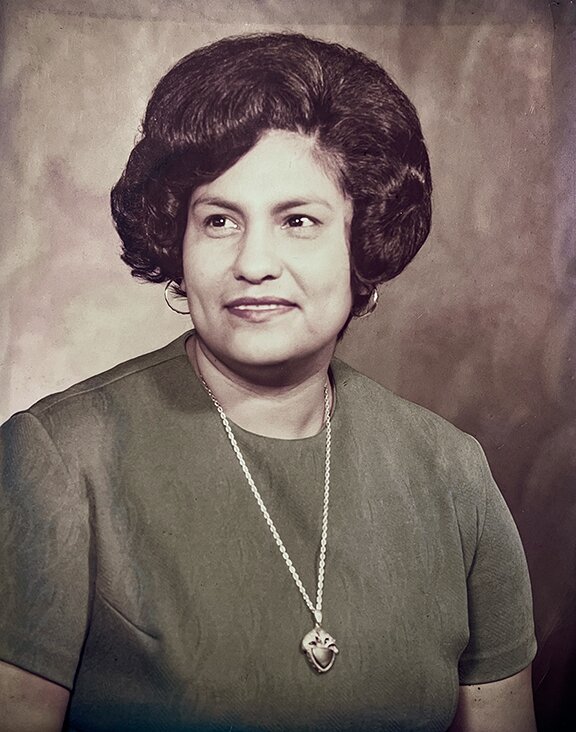 Please share a memory of Mary to include in a keepsake book for family and friends.
View Tribute Book

Born May 3, 1937, to Henry and Susie Acosta in Pilot Knob, Texas, Mary lived in Manchaca her entire life. She was the youngest of six children and attended Manchaca Elementary and Fulmore Jr. High.

Mary and Margarito (Mage) Martinez were married May 12, 1956 and were together 47 years before Mage joined our heavenly Father. They had seven children, six girls and one boy. Mary started her working career after putting her last child Reynalda into pre-kindergarten, working at St. Edward’s University, then at Austin Independence School District, retiring after 25 years as head custodian.

She was an active member of San Jose Catholic Church and a member of Las Guadalupanas, a group devoted to the Blessed Virgin of Guadalupe whose mission is to provide leadership in social concerns and perform works of charity.

In her later years, Mary started attending St. Ignatius Church with her daughters, Bertha and Becky. They usually sat on the right-hand side in the second pew. People referred to them as the “golden girls.” Mom often had Father Joe Tomei and Bishop William “Bill” Wack of the Diocese of Pensacola-Tallahassee over to her house for a good home-cooked meal.

Her cooking was admired by many and she knew how to make the best tortillas, beans and Mexican rice. Her carne guisada was well-known to many and requested by all. When she was in the kitchen cooking, she would often have the radio on a Spanish-language station, listening to music. She loved to dance and it was routine that she and Dad would go dancing on Saturday nights with Tete and Vickie or Bea and Willie or anyone who wanted to join them. Music and dancing were part of their social life.

Mary had many hobbies and talents--from her daily hour-long walks so she could pray the rosary, to her green thumb, resulting in a yard with the greenest grass you will ever see with beautiful flowers and plants of all kinds. She was proud of her ability to operate the tools Daddy showed her how to use--the push mower, the riding lawn mower and yes, even the weed eater.

She was also a baseball fan. Most people think she was a baseball fan because Daddy used to have a semi-professional team called the Manchaca Cobras, but she knew how to play baseball before Daddy, as she’d been a baseball catcher in her younger years. She used to tease that she was a better baseball player than her brothers. Her favorite baseball team is the Texas Rangers and she did not miss a game on television. If she couldn't find the channel they were usually on, she had no issues calling son-in-law Jimmy, saying “Jimmy, I can’t find the Rangers on TV, which channel are they on, man?”

Mary had a strong-willed personality; she was strong in mind, body, and had a spirit that knew no limits. Her faith in God was strong like her mother’s. For any issue or concern, she would say to leave it in God’s hands, and she truly believed it. She had a competitive fun spirit where she would often say, “No one is going to ganar (defeat) me.”

Mary was preceded in death by husband Mage and daughter Rebecca “Becky” Martinez.

The stories can go on forever for we all did so much together as a family; like going to Six Flags, camping at Marble Falls, Easter Sunday gatherings, Thanksgiving dinners, opening presents and then breakfast on Christmas morning and of course, Sunday brunch after church with BBQ later in the afternoon. There wasn’t much we didn't do as a family and we have our parents, Mary and Mage to thank for that; they instilled the importance of family in all of us.

Interment to follow after at Live Oak Cemetery in Manchaca, Texas.

Due to COVID-19, the family will not have a reception. Thank you to everyone for your support and understanding.

Share Your Memory of
Mary
Upload Your Memory View All Memories
Be the first to upload a memory!
Share A Memory