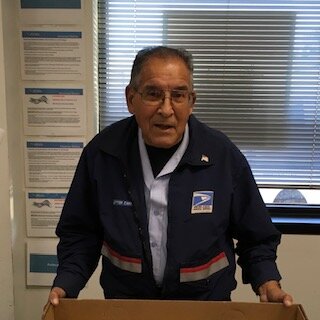 Please share a memory of Miguel to include in a keepsake book for family and friends.
View Tribute Book

Michael "The Mailman" Sanchez, of Austin, Texas, was called home to our Heavenly Father on Friday, December 30, 2022.

He was born on April 9, 1948 in Austin. Michael's lineage likely predates Texas. When asked, "Where are you from originally?" The Sanchez elders would reply, "We are from here".

Michael grew up in Old East Austin, graduated from Austin High School in 1968, then voluntarily enlisted in the United States Army. In 1969, Michael completed a one-year combat tour on the Mekong Delta in Vietnam, and was honorably discharged in 1971 having achieved the rank of E-5 Specialist.

After eight years with the Texas Parks and Wildlife, Michael began his illustrious 40-year career with USPS as the Eastside's Mailman.

Committal Service will be held on Friday, January 13, 2023 at 10:00 a.m., at Central Texas State Veterans Cemetery in Killeen, Texas.

Share Your Memory of
Miguel
Upload Your Memory View All Memories
Be the first to upload a memory!
Share A Memory