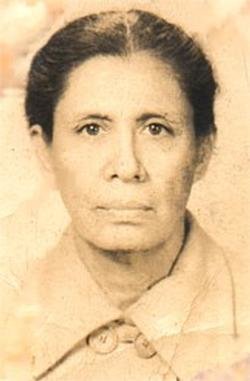 Ms. Soledad Perez, age 93, resident of Austin, was called by our Heavenly Father on Sunday, January 23, 2000. Soledad was born in Ciudad Victoria, Tamps. Mexico to Demetrio and Maria Perez. She moved to San Benito, TX as a child where she lived for most of her life. In San Benito she was a member of the St. Benedict Catholic Church. She was a 30-year member of the Catholic Sacred Heart Society. In 1991 she moved to Austin and became a member of Dolores Catholic Church where she served faithfully through the years. Even though she never married, she helped raise several children and dedicated her life to helping her extended family. Soledad had a zest for life and loved meeting new people. Everyone who knew her could not help but love her. Survivors include niece and caregiver, Magdalena Macias of Austin; cousin, Eladia Torres of Los Angeles California; great nieces and nephews, Silvia Macias, Martha Rodriguez, Maricela Cantu, Miguel Macias, Ciro Macias Jr. all of Austin, and Gustavo Rodriguez of North Carolina. Recitation of rosary Tuesday, 7:30pm at Mission Funeral Home. Mass of Christian burial will be celebrated Wednesday, 10am at Dolores Catholic Church. Reverend John Korcsmar C.S.C. will officiate. Interment will follow in Capitol Memorial Park Cemetery. Serving as pallbearers are members and friends of the family. Arrangements by Mission Funeral Home, 1615 E. Cesar Chavez, (512) 476-4355. To view and sign memorial on-line, visit www.missionmemorials.com

Share Your Memory of
Soledad
Upload Your Memory View All Memories
Be the first to upload a memory!